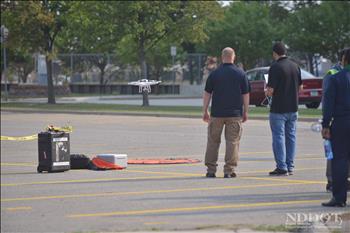 FARGO, N.D. – The North Dakota Department of Transportation (NDDOT) and Northern Plains UAS Test Site (NPUASTS) announced today the successful completion of testing Unmanned Aircraft Systems (UAS) in Fargo.  Working in partnership with CNN, Botlink and ParaZero, the NDDOT and NPUASTS performed its first series of flight tests of Unmanned Aircraft Systems for potential flight over a group of people in controlled airspace.

This is the first phase of North Dakota’s Unmanned Aircraft System (UAS) Integration Pilot Program (IPP) which is designed to help the Federal Aviation Administration (FAA) create new regulations that will enable the safe and secure integration of UAS (drones) into national airspace systems.

“NDDOT is excited to work with Northern Plains UAS Test Site and partner with CNN, Botlink and ParaZero to advance research and commercialization of Unmanned Aircraft Systems,” says Russ Buchholz, UAS Integration Program Administrator at NDDOT. “We are testing the safety of UAS systems and looking at how they can operate in different types of situations.”

“The Unmanned Aircraft Systems Integration Pilot Program’s purpose is to help to enable advanced UAS operations, by working collaboratively with industry and government,” says Trevor Woods, Director of Safety at the Northern Plains UAS Test Site. “The collaboration between the NDDOT and the NPUASTS brings two, innovative organizations together that can best serve the State of North Dakota’s UAS interests, provide an environment for industry to achieve their goals, and support the FAA with UAS integration initiatives.”

“This collaborative program is a huge step forward for the industry allowing the utilization of UAS for media, law enforcement and inspection in urban environments. Botlink is excited to bring safety features and technology enabling the integration of UAS in the national airspace and the commercial use of UAS for operations over people. We are thrilled to be part of this collaboration with the North Dakota UAS team and CNN," says Terri Zimmerman, CEO of Botlink.

“As safety is a critical issue, ParaZero presented their drone safety system as one of the safety solutions to enable flight over people,” says Eden Attias, CEO of ParaZero.

In May, U.S. DOT selected the North Dakota Department of Transportation as one of 10 participants in the Federal Aviation Administration’s UAS Integration Pilot Program. NDDOT and NPUASTS are working together with partners and stakeholders to accomplish North Dakota’s pilot program mission to provide operational efficiencies, create new opportunities, build industry to grow the economy and reduce traffic fatalities and serious injuries. The three-year program gives state, local and tribal governments a chance to establish innovation zones for testing complex UAS operations.

The State of North Dakota is a leader in transportation and UAS advancement. The UAS Integration Pilot Program technology will enhance North Dakota in many areas such as pipeline or infrastructure inspections, traffic crash reconstruction, and emergency response during a life threatening event in rural areas, such as finding a missing person in the Badlands or on lakes and rivers.

About North Dakota Department of Transportation

The North Dakota Department of Transportation (NDDOT), established in 1917, is an innovative and progressive organization with the mission to safely move people and goods. NDDOT strives to build and maintain an efficient transportation system of more than 8,518 miles of roadway and 4,858 bridges. Innovation and integration of the UAS pilot program is key in expanding NDDOT’s future vision for traffic safety, autonomous technology and partnerships. For more information visit dot.nd.gov.

About Northern Plains UAS Test Site
The Northern Plains UAS Test Site (NPUASTS) is one of seven Federal Aviation Administration UAS test sites in the nation. The mission of the test site is to collaborate with FAA and industry partners to develop, systems, rules and procedures to safely integrate unmanned aircraft into the National Airspace System without negatively impacting existing general or commercial aviation. For more information, visit npuasts.com.

About Botlink
Botlink was founded in Fargo, N.D. by military pilots and engineers with the intent to safely share the benefits of drones. Botlink is a cloud-based operations platform that links drones to industry in real time. The platform allows users to capture, process and deliver aerial imagery. Botlink also provides automated drone control and safety features allowing operators to remain safe and compliant with complex flight regulations. For more information visit botlink.com.

About ParaZero
ParaZero (www.parazero.com) was founded in 2014 to accomplish a vision to enable the drone industry to realize its greatest potential. ParaZero offers a smart and intuitive solution to enable drone industry growth by designing, developing and providing best-in-class autonomous safety systems for commercial drones.